Growing with the Flow

Communities come together in times of need and I have seen our community grow immensely in a short period, or maybe more accurately my appreciation of our community grew even more.  This past week has been challenging for many and many are likely still facing challenges in the days to come.  Through these challenges I have witnessed some amazing scenes.  The sights would restore even the most down trodden view on humanity.

I want to share with you a couple of the highlights I saw while trying to do my part.  I want to brag about the community we all call home and provide reasons why we should all be proud.

The first scene was a mother wading through knee high water to get her three kids off the school bus.  She then carried them, one by one, to dry ground.  Traffic waited, in water, while she made the three trips.  The maternal care she showed and the relief she demonstrated as she placed the last child on dry ground moved me and allowed me to push harder through my day.

Firemen are a special breed and we have some of the best volunteer firefighters around right here in our community.  In a time of high stress and continual action, a couple of them calmly aided seniors onto a bus as they evacuated the Lions Villa.  Each fireman was able to smile and infuse a sense of humor to reduce the stress in the entire situation.  As the bus stopped to drop off a couple of the seniors on board, the firemen piggybacked them to dry ground and again humor made the situation more bearable.  I was again left feeling blessed in the midst of chaos.

With homes fully surrounded by water, I could see neighbors gathered on small pieces of dry land, talking and even laughing with one another.  The sound of running pumps and generators prevented me from hearing the laughter but their facial expressions indicated that it was forced simply to help them keep their sanity.  They were leaning on each other as they sat scanning the floating debris and tangled pipes amongst their subdivision.  Their ability to face such a tough situation with a brave face made me realize how small some of my day to day problems really are.

Kids always seem to have a positive attitude and as our future that is a great thing.  As parents struggled with trying to minimize the damage to their homes, I watched kids playing obliviously to the ramifications of what was going on around them.  The link between youth and innocence was driven home as the kids splashed in a puddle at the end of his driveway.

Maybe the biggest testament to how strong our community truly is was how often I saw friends helping friends.  On a normal day, a household would sit lifeless as the home owners went quietly about their day.  Over this week this same home has 4 or more people milling about trying to put it back together.  Some of the people are family members while others are neighbors who are slightly better off.  This happened instantly and likely without even a call.

Witnessing all this made me incredibly proud to call this community home.  I wish every one a smooth road to recovery and can’t wait to see how we grow as we come through this.
Posted by Wandering Whalen at 6:59 PM No comments:

The ice is finally moving out of the rivers and I'm lucky enough to get paid to watch it move.  Have you ever watched ice flows move down a river.  It is a bit of a humbling experience.  We have all likely seen a flooded river carrying debris down stream in a rushing torrent and that in itself is very impressive.  Ice flows move differently.  There is a slow motion effect to the movement and the torrent is hidden under the ice cover.  The biggest indication of the power of the ice is the sounds being created.  The loud pops, cracks, and crunches are signs that the river is powerfully tearing apart large ice sheets and moving debris downstream.  I took a short video recently and thought I'd share it here.  I'm no photographer and by an even farther stretch, no videographer but it still shows the power of nature.

This jam didn't result in any damage and I have seen bigger jams but I felt safe enough next to this one that I could take the video.  Things can change quickly in a jam and where one minute there was water flowing through a hole, the next it is clogged with ice, and then water backs up and a head is created.  If you are observing ice flows do so with caution and preferably from a distance.

Just as a note on the video, what caught my attention first was the fact that there was a tire floating on an ice sheet.  I observed the flow for about 15 minutes and the tire remained on the ice for the entire time.  No doubt it will end up in the Bay of Fundy.

Posted by Wandering Whalen at 8:59 PM No comments:

Don't Blink or You'll Miss Me

So today I completed my first TV News interview.  It took all of 6 minutes for Ashley Dunbar to get the footage she needed and it took a small fraction of the time for it to air.  I came across fine but I was nervous to see how she would edit it.  I rambled a bit more than I was taught and this fed my worry.

I don't think that Matt Damon has anything to worry about because Hollywood won't be calling anytime soon.  But why don't you be the judge.  Check it out at CTV News. 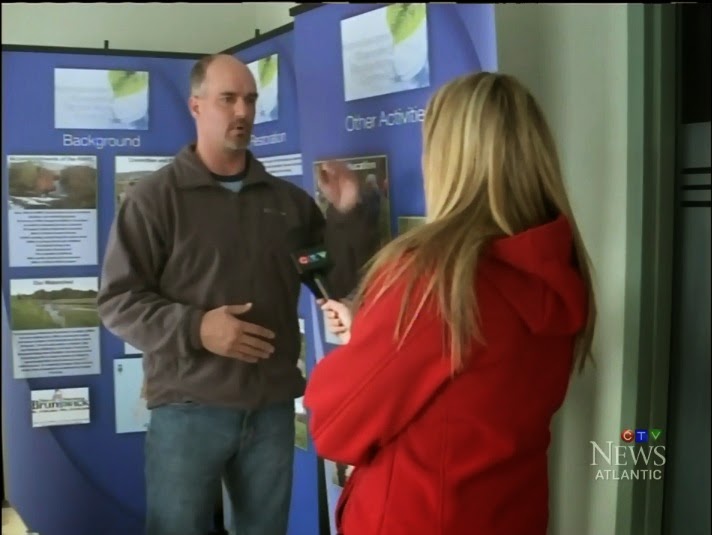 Posted by Wandering Whalen at 10:37 PM No comments:

The Human Nature of Weather

The weather is a part of nature, however, I think it might also be a part of human nature.  There have been a number of times when wandering that the weather has changed my mood as often as it changed its own mood.  What is it about the weather that affects us?  Here in the Canadian Maritimes we recently experienced a crazy winter storm.  In Kings County, NB the storm did not necessarily hit us the hardest but it still walloped us with a wild and windy punch.

Shortly after family dinner, I decided I should shovel the drive way.  I have found it much easier to shovel the driveway a couple of times through a snowfall event rather than shovel it once at the end of the storm.  As I prepared to go out to shovel I nudged the kids into coming out with me.  I quickly shoveled the driveway out and then played with the kids.  It is bizarre how wild weather can bring out the kid in you.  The kids were already laughing and having a blast in the winter blast and I couldn't help but join them.

I decided to bury my head in the snow and show the kids how quiet and less windy it is under the drifts.  We looked like a bunch of ostriches with our heads in the sand but the kids were amazed at how quiet and warm it was.  As a car drove by, I wondered what they thought when they seen us with our heads in the snow.  I couldn't help but grin broadly.

My son ran to the snow bank in the back yard and wanted to show me how high in was.  I have to admit it was impressive, likely about 4.5ft in height.  It ran the entire length of the house and a snow bank that brother created when he plowed my driveway.  We all climbed the high snow pile and jumped into the drift.  I was instantly transported back to my early teens when I would do a front flip into such a snow drift.  On my second jump, at almost 40 years old, I completed a front flip into the drift.  It wasn't graceful but the judges were generous and gave me a 7.

What made me do the front flip?  What made me go out in a driving snow storm to play with the kids?  Why did I grin like a kid the whole time out there?  These questions have came to mind in the past.  I've never found a great answer.  The only thing I come up with is that being outside affects our brain makes us feel younger.  With this thought, I've often felt that maybe simply being outdoors more is the secret to staying young.  Maybe natural surroundings are a fountain of youth.

What do you think?  Is it human nature to be in nature?
Posted by Wandering Whalen at 9:49 PM No comments: