Do you have an old computer tower you need to get rid of?  How about an old TV that just refuses to show "Hockey Night in Canada"?  Maybe you just painted your house or changed the oil in your car and need to get rid of unused paint or old oil.  What ever the case is, this Saturday for those residing in the Kings County Region Solid Waste Commission (KCRSWC) region, you can get rid of your household hazardous waste and electronic waste for free.  All you have to do is bring it to the Sussex Waste Transfer Station on McLeod Street in Sussex from 10:00am-3:00pm on Saturday May 1, 2010.

The KCRSWC has partnered with the Westmorland/Albert Solid Waste Facility to bring its residents this great service.  The staff at the transfer station will help you unload your waste materials and make sure it gets disposed of in an environmentally sound manner.
Posted by Wandering Whalen at 7:51 PM No comments:

Fishing season is now about a week old, hard to believe, because the weather makes it seem like it should be a month old.  I had my son out over the weekend and despite spending a great deal of time untangling his line and unhooking him from trees, we managed to catch 6 trout.  Two of them were below 7inches and the others were between 9-10inches.  The afternoon started off slow and I had a hard time keeping my son interested.  It was an overcast day and there was no action at all.  As the sun broke through the clouds though the fish came alive and we couldn't keep them off the line.

Seth became so excited he forgot the sunglasses he had found earlier, two holes back.  Back we went, to retrieve the "dinosaur glasses" he had found and lost.  He quickly found them again with his keen memory and sharp eyes.  I hope in the future he can look back and appreciate the time we spend together the way I do.  One thing I don't have to worry about is the way he loves to show his grammy the fish he caught.  "We gotta show Grammy Dad" he enthusiastically insisted.  I snickered to myself as my memory flashes back to when I was a kid.  I always had to show Mom the fish I caugth.  I know now that she doesn't appreciate the smell or the sight of the fish dripping in her kitchen, but she always acted excited and happy and that afternoon was no different.  I smiled at her that afternoon as she faked excitement for my son's catch and I hope she realizes how much we love and appreciate her for that and so much more.

I don't keep many fish over the season but I always like to keep some on my first trip just so I can savour the taste but I'll leave that for another post.  I have to take the trout home to clean them and my wife, like my mother doesn't like the smell, sight, or even the taste of trout.  She too, for the sake of Seth's enjoyment fakes excitement as he comes in screaming about finding glasses, catching trout, getting wet, and seeing Grammy and Grampy.  She looks at me as I tell her I was going to clean them in the sink and says "You're not serious. You better clean up the sink when your done."  It is a quick task for me to clean the fish and my son still has no interest in this part of fishing but he peeps in from time to check on his fish.

Later as I tuck him into bed I thank him for a great day and then we say our prayers and thank God for fish and family.

See you on the water.
Posted by Wandering Whalen at 4:11 PM No comments: 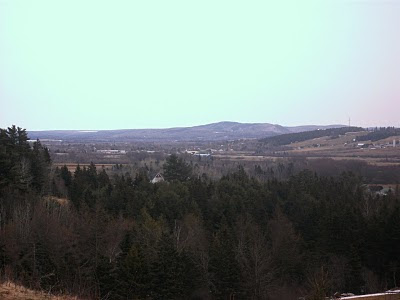 Whalen's Wanderings
Completing the Circle, Walking a Loop
Shaylee, my daughter, sits on my lap as I write this column.  I feel that is very appropriate since this edition of my wanderings is very much oriented towards family.  I consider myself very blessed to have such a great family.  I took special note of this recently on a hike that I went on.  My father, my son, and I took a short hike along the ridge in Foxhill.
Over the years my father and I have logged a great deal of time together in the wilderness and I can usually count on him for companionship when I need it.  On this day he did not disappoint me and was eager to come along with Seth and me.  Seth too was excited to go, especially since his Grampy was going.  Seth must have asked 15 times between Sussex Corner and Apohaqui "Are we there yet Daddy?"  When we pulled into the parking area at Jones Park he was out of the car before it was fully parked.
We took off, the three of us, across Highway 121 and up the hill on the east side of the Millstream River.  Many times, on my way to church, I had looked up at these hills wondering what the view was like.  Now I was about to share it with two people who have a huge influence on me and my column.  The first hill was long but gradual and as we reached the top the wind picked up and chilled us all to the point where we all pulled our hoods up.  I stopped at the top and took some pictures and Seth asked if he could use the camera.  I handed him the camera and let him take a few pictures.  It was interesting to see what he focused on.  I typically take landscape photos while he focused on the hay bale sitting nearby, or the largest log in a woodpile.  My father on the other hand would likely turn the camera towards the nearest person and snap photos.  Three generations, with similar interests but different perspectives.
The hike continued along the south side of the Foxhill Ridge and it offered many great views up and down the Kennebecasis River from Sussex to well beyond Apohaqui.  The ridge dropped quickly to the river to the south while to the north a diverse forest offered more to explore.  We stopped for our first break at a large rock, that Seth thought, made an ideal seat.  After a short break we carried on into a small ravine and across a small stream where ice was still clinging to the large rocks.  After a series of small ups and downs, we reached a rock escarpment that offered a great resting place and view, we stopped for a few more pictures and carried on.  We reached the Allaby farm and made the turn to head home.  We stopped again at the escarpment for another snack but the cold wind chased us away prematurely.
As we started down the last hill to the car, completing our loop (circle), Seth was walking between my father and me holding our hands and it was then that I realized how lucky we were to have shared this experience.  My father, when I was young, gave me the gift of the wilderness, and now I get to share it with my son completing the circle.  It was, dare I say, an emotional moment for me and as I was about to verbalize it, my father gave me that knowing look and we thanked each other.
Stay in touch. Get Hotmail & Messenger on your phone.
Posted by Wandering Whalen at 10:38 PM 1 comment: