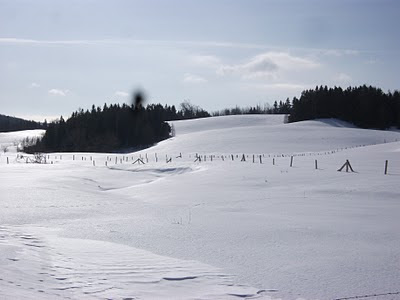 Nature as Lifting Therapy
It was an incredible day today.  It is February 17, 2011 and the weather today had that first big hint of the coming of spring.  I couldn't sit in the office all day and write proposals and permit applications.  I had to get out and enjoy the weather.  I decided that we should go out and check on one of our aquatic habitat restoration sites to see what it looks like in winter time.  Chris McKnight, a colleague who has become a good friend, and I headed out to the large farm where in the summer of 2010 had worked at restoring the degraded riparian area.  The large fields spread far with virgin snow and the sun shining warm across my shoulders.  It was a great feeling.
I snapped lots of pictures to illustrate the depth of snow which in places almost hid fence posts that hold a three strand barbed wire.  As we walked along a small tributary with steep banks I was amazed at the immensity of the drifts that heavily exaggerated the narrowness of the small ravine.  We easily walked over the fence in places and the brook in other places thanks to the drifting snow and ice.
As we complete the site assessment and start the journey back to the car I can't resist to walk across the field.  As I start up the hill I feel like I'm gliding.  The expansive, openness and the slight breeze seemed to push me across the field.  It started Chris and I talking and I came to a realization.  When our minds are tangled and stress has us tight as a drum we can lose it all in nature.  We can let the immensity of the beauty and the vastness of the open spaces, move us along and we can glide across the snow covered fields with no pain and little effort.
At a time in my life when I am dealing with a few things this was a great moment.  I'm glad that God gave me this moment and the ability to see it for what it was.  I pray that those who are struggling with their own lives can empty their minds and let nature take over for awhile.

Posted by Wandering Whalen at 10:13 AM No comments:

Getting Through February with a Festival 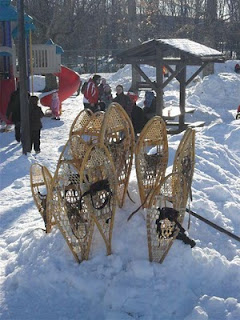 Just a note this is an article that I had published in the Feb 1, 2011 Kings County Record.  The Sussex Corner Winter Carnival is this weekend and I hope to see you there.
Celebrations and festivals are great ways to bring people together in a community and allow them to enjoy the best their region has to offer.  Over the last few years the Village of Sussex Corner has revitalized their annual winter carnival to a point where the community now anticipates its arrival.  I am proud to be a part of this effort and I too look forward to its annual arrival which I am happy to say is February 11th and 12th.
The Sussex area is blessed with many such celebrations and there isn't a season that goes by without a reason to celebrate.  The festivities vary in size and activity but all of them provide the community with a reason to get out and socialize.  The Sussex Corner Winter Carnival is no different and it is a great way to break out of those winter time blues and enjoy what winter has to offer.  No matter what your interest is there is likely something for you to enjoy there.
As a Canadian you likely enjoy hockey so you might want to register a team for the Corner Cup pond hockey tournament or maybe compete in an "Amazing Race."  Maybe you like something slightly less competitive so you might be more into the snowshoe or cross country ski outings.  If your family isn't up for those you can simply enjoy the free skating and games that will be offered throughout the day on Saturday.  The kids will love Peter and Penny Penguin and get giddy with excitement while competing against them in the kid's games.  If you are into art and entertainment the Winter Carnival has you covered as well.  There will be snow sculpting contests, music, and magicians there to entertain you between all the other events.  Horse drawn sleigh rides cater to those looking to enjoy the old fashioned style winter fun and of course you can't have a winter carnival without having a sliding hill.
Likely the best thing the Sussex Corner Winter Carnival has going for it is that all these wonderful activities all take place in one location.  Unlike some similar festivals where you have to commute from activity to activity, the Sussex Corner Winter Carnival is situated so that you can park your car and take it all in with only a short walk, snowshoe, or cross country ski to the next activity.  By the end of the fireworks on Saturday evening you'll be asking yourself "Why don't we do this more often?"  You'll have talked to friends and neighbours and caught up on all the good things going on in their life and shared your latest news.  After the fireworks the community will be closer and if we happen to start to drift apart again, the next festival will draw us all closer again.  We really are lucky to live in such a close community where people step forward and organize events like the Sussex Corner Winter Carnival.
If you are looking for other events the Dairytown Classic basketball tournament, the Apohaqui Winter Fun Day, the annual Snowball tournament, plus many other events are waiting for you to wander through and all are coming up soon.  I hope to see you in the snow banks.
Posted by Wandering Whalen at 9:09 PM No comments: 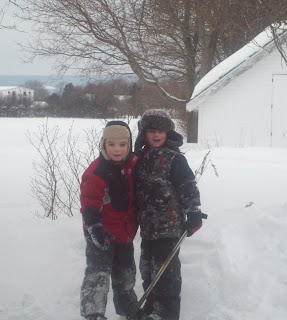 What a winter to try and create my first outdoor backyard rink.  I think I am ready to admit defeat.  I now have banks around the ice surface that are over 5 ft high all the way around.  To top it off, it is covered in snow once again.  We have skated on it a grand total of three times, for likely a total of 4 hours tops.  In those 4 hours though there was lots of fun and it has made it worth the effort.  Take a look at the smiles on the boys faces.

Before you ask "Where are their helmets?"  Let me defend by saying it was either frost bitten ears with a helmet on, or put on bulky hats to protect cheeks and ears from the bitter cold that day.

I might have to shovel it off at least one more time :)
Posted by Wandering Whalen at 8:44 PM No comments:

A little over a week ago I had one of those days.  You know the kind.  A day that memories are not really made, but life is none the less made richer.  A day where everything just seemed right.  A day where there just seemed to be God's light shining on everything you did.  By no stretch was the day special, but it was personally rewarding.  As I made my way home at the end of the day I knew exactly who to thank as I smiled to myself as everyone else slept during the drive.

In the morning I coached my son's hockey practice and the practice ran smoothly with the kids having lots of fun.  They smiled as the coaching team ran them through the drills and I felt a sense of pride and accomplishment with this simple task I was doing.  After practice my wife and I took the kids to Tim Horton's for a treat and we all laughed and relaxed while sitting in the eating area of the cafe.  At this point I thought to myself "What a great Canadian morning."

At home that afternoon I played and wrestled with the kids and that bright feeling continued.  My son's excitement for what was to come that night was growing.  As we loaded the car up, the kids and I dropped my wife off at work before heading to Saint John.  Before leaving Sussex though we stopped for a quick supper at McDonalds, my son's favorite place to eat.

The weather on the drive down was excellent and the kids laughed and sang as we enjoyed each others silliness.  Our first stop in Saint John was my sister and brother in-law's to drop off my daughter.  They had agreed to babysit her while my son and I headed to a hockey game.  Seth is a big Saint John Seadogs fan and was excited to go watch them play.  We walked through the pedway system in Saint John and Seth was amazed by all the people and by the fact we could walk inside, while seeming to be outside.  We obviously don't get him to the city enough.

This would be the second game he would see and the first one was too loud for him.  This time we went prepared with some earplugs.  As it would turn out he wouldn't need them.  He danced like a maniac trying to get himself up on the big screen to no avail but we had fun trying.  He pigged out on ice cream and cotton candy and head bobbed to the music throughout the entire game.  Even when the Seadogs scored one of the many goals they scored and the siren echoed inside the Station he cheered.  He no longer minded the noise that once bothered him as he was to enthralled by the blimp flying over head or by Fleaburn to be bothered by noise.  The Seadogs won handly that game with some great hockey but I didn't even notice the game as much as I was watching my son grow up in front of me.  Over the two hours we were there my son seemed to age his entire 5 years and I realized how thankful I was to have him in my life.

After the game we picked up Shaylee and did our best not to wake her for the ride home.  As Seth faded to sleep I turned on some light music and was overcome by that bright immense feeling of happiness again.  I said a little prayer with only my wife's absence being the only dark part of the day, but even that is worth being thankful for as we are both willing and capable of working to provide.

It was truly a blessing, this day I now write about.  I hope you can take the time to see these days when they happend and give thanks for all those small moments.
Posted by Wandering Whalen at 8:33 PM No comments: