There is a great deal to be said about the simple things. This has become much clearer to me since becoming a father. Shortly after my son was born I really thought I was still going to be able to get out and enjoy lots of backpacking and camping adventures. This has turned out to be harder than I thought. I have learned though that the simple things can be just as fun as the longest hike into the toughest terrain. 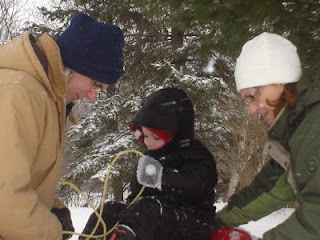 Just the other day, we have been blessed over the last week with some great winter weather, I decided to take Seth sliding at his grandparents. They don't have a big hill in their backyard or anything exciting so I was aiming small. We got dressed and headed out with him talking 90mph about all the things he was going to do while sliding. The plowed up mound in my parents backyard was actually quite large, thanks to the snow we have gotten this winter. We took the flying saucer, a simple slide unlike the GT Racer's and such, and made a great path down the bank. In the end Seth was sliding more than 12m each trip, which for a 3yr old is plenty far. He was having a blast and so were his grandparents. We made snow angels together and even swung on the swing set for awhile. Before long he started thinking about going inside, and hot chocolate. You could see it in his eyes when he thought about hot chocolate and from that moment on it was all he could think about.
I had a hard time getting him out of his snowpants cause he wouldn't sit still. Snow was flying everywhere as I pulled them off. He danced over the puddles and up the stairs to get his hot chocolate. Now hot chocolate is simple enough but, it was the marshmellows he truly wanted and we had a giggle over this. In three hours Seth had a full day and tired himself out doing simple things and I come to realize that I too was tired out. 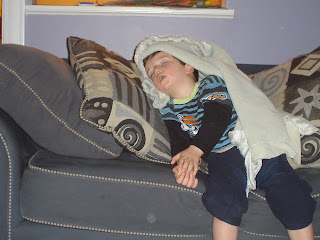 The hot chocolate drove the message home for me that day and inspired me to write this all down. Simple rewards are still rewards and nowadays I fill my self with a greater number of simple rewards as opposed to filling up with a few large rewards. Most of this came to me while I watched my greatest reward sleep on the couch. He just didn't have the energy to clean up his toys before bedtime.
Posted by Wandering Whalen at 10:58 AM