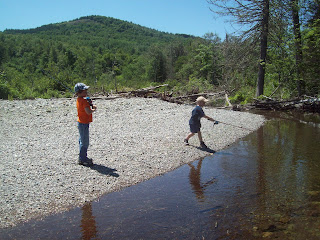 Kids are great fun. It takes very little to entertain them for hours.  A couple of weeks ago I decided to take my son and a friend of his fishing.  The original intent was to take them camping out for a night but the day we were to go it rained.  Now normally rain doesn't bother me, but I mean it rained hard and I wasn't going to take two six year old boys out in the woods with that kind of rain.  I'm getting off the point though.
I postponed the trip and made it a day of fishing instead.  The boys were game from the get go and when I asked if they wanted to turn off onto the back road, they hollered a resounding yes.  I turned onto the back road with Rodney Atkins playing over the radio, the windows down, and the sunshining.  Cold water was on my mind as the weather the past few days had been warm so I was thought the ice cold Cedar Camp Brook might be a good spot.  Another bonus was that it was not an overly deep or large river so the boys would be safer while fishing in and around it. 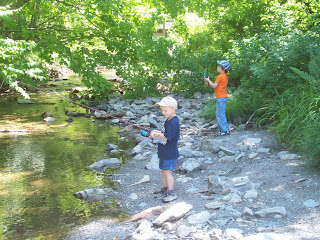 When we finally pulled up by the old church the boys could hardly wait to get out of the truck.  I slowed them down long enough to get sunscreen and bug spray on them.  We then made our way down to the brook and fished down stream towards an old beaver pond.  Before long they were tangled in the trees and shrubs that lined the banks and I made an effort to show them how to keep their lines in the water.  It took some practice but before long they were dropping underhand casts into the cold pools along the brook.  Shortly after that, I hooked a 9" brookie, and let my son reel it in.  He was really excited and was only slightly disappointed that we let it go.
The morning moved into the mid-afternoon and we caught plenty of trout and I decided to keep two for a shore lunch.  We made our way out to the road that runs parallel to the brook and the boys chatted back and forth, and dragged their feet from time to time as they walked up ahead of me back to the truck.  None of us were quite ready to head for home yet so I took the boys to a spot along Trout Creek where the boys could fish or swim if they liked.  It was also a nice spot to cook the trout, the hot dogs I had packed, and boil some tea. 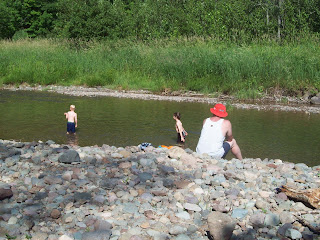 My father who had hoped to join us earlier, met up with us along Trout Creek, and this helped me as I prepared lunch.  I was cooking the trout on a stick and I thought this would impress the boys but they only stopped briefly to say half heartedly "Thats cool."  They then decided they had enough fishing and went swimming instead.  When lunch was ready the boys quickly came and devoured their share of the trout and hotdogs and then splashed back into swim.
When I finally joined them in the water we all laughed and splashed.  At one point, my son's buddy was sitting on the shore.  His lips were blue and he was shivering and out of concern I asked if he was alright.  His response "I'm just loving this."  That pretty much summed up the day to a tee.  I loved watching my son and his friend bond.  I loved watching them explore the river and the nature that surrounded us all day.  Maybe most of all, I loved the memories that we were all making together.  It was a great day and worthy of being shared here.
Posted by Wandering Whalen at 11:19 PM