Blogger's Note:  This is a copy of the column I had published in the November 12, 2013 Kings County Record.  I have performed a clean up, on the waterfall site referred to, in the past.  I have also cleaned up sections of  the road that leads up to Misty Mountain.  It is maddening that people continue to dump garbage in various locations along the Millbrook Road. 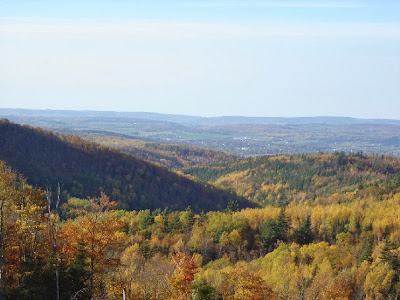 There is a place near where I grew up that has long been a destination for partiers, hunting, and outdoor enthusiasts.  Parties were held there, first time camping trips have also been a part of the landscape there, bike trips often rest there, and water will always be its signature.  Misty Mountain is a local landscape legend.  It has a long history that includes farming, forestry, and spring water.


Topographically, it is not overly impressive, its rounded mass and height though make it stand out amongst its nearby counterparts.    Two steep valleys surround the mainly forested mountain and the valleys provide some beautiful scenery, no matter the time of year or the weather conditions.  The Cotter Hollow stream wraps its way around the hill flowing from its source on the high southeast shoulder, moving first to the east for a short time, then an uninterrupted run north before turning west towards the Mill Brook.  The Mill Brook runs the other way, clock wise, around Misty Mountain.  It starts in dramatic fashion with a high waterfall at the source and I often love to visit its look off which you can drive up to.


I use the term "drive up to" rather loosely.  You'll need a four wheel drive vehicle with modest clearance to get there.  The roads aren't fully mapped so that gives you an indication to how rugged it might be.  Approaching from what locals call the Misty Mountain Road it is a steep ascent up the southwest portion of the mountain.  Deep gullies fill the road and you need to choose your path carefully or you could end up hung up.  As you near the top clear cuts currently become noticeable to your right and you get a great view towards Sussex and beyond that to the hills around Springfield.  It is a great view and an almost noble location that will always speak to those who know its greatness.


On my latest trip up there I had my kids and I was hoping to show them the waterfall and sharing with them the Mountains modest nobility.  Not everyone knows about its nobility though and I was frustrated to see that a great deal of garbage was thrown into the small stream at the top of the falls.  I couldn't believe it and I loaded my kids back into the truck without walking down to the look out.  Instead I drove a little further on where a large stump provides a great seat as you look back down the Valley.


Many people gripe about clear cuts but at this point I was more frustrated with the illegal dumping than with the large clear cut swaths that now dominate this area.  The mountain is no stranger to clear cuts as it was likely cut over about 60 years ago.  The trees that replaced the ones cut back then were ready to be cut again and so, they were cut.  The steep slopes mean that not all the trees are cut and the streams still appear healthy when viewed from the channel.  Litter and trash though scar the landscape for years and don't regenerate like the trees.  Dump sites actually grow because when someone sees a dump site they think it is ok for them to dump too. Clear cuts provide vistas to see beyond the trees and stumps to sit on while you take in the view.  Dump sites simply stink and detract from the scenery both near and far.  Before you dump trash along a back road, no matter how far back, keep that in mind.  With waste management systems today it is easy to get rid of trash.  Heck you pay for the system through your taxes, so why would you pay for the fuel in your truck to dump it illegally.

Posted by Wandering Whalen at 7:14 PM