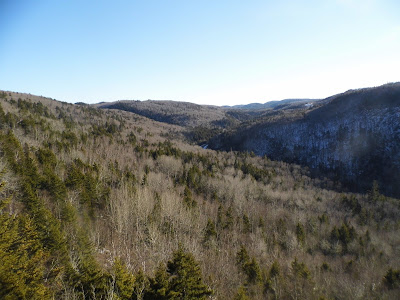 Today was a rare day.  It is only February but the weather lately has been more like late March or April.  Sun was in the forecast and I wanted to take advantage of some free time.  I  put out some calls to see if there was anyone interested in joining me.  Like many other times, my father called and said "I'm in."  I want to state how fortunate I am that I can still enjoy days like today with my father.  Him being with me adds a whole level of enjoyment that can't be defined and I dread the time when he can't be there.

The plan was to try and find a rock face that I somehow missed on a previous outing.  We would approach it from the opposite direction and the knowledge from the previous outing gave us a much better chance of finding it, despite not having a GPS this time.  We would start on a tributary to Trout Creek.  We would walk a little more than a half km up the tributary and then turn east and follow a small stream up to the top of the ridge. 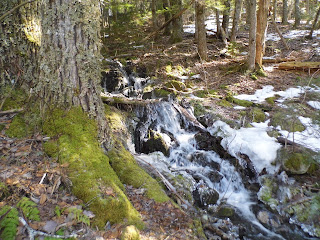 As we reached the top of the small stream we found an unexpected rock outcrop where we hung the hammock and enjoyed a snack. We chatted about the weather and discussed politics while the dogs played tag with one another.  Things almost appeared to be moving in slow motion as we sat there.  A cold breeze moved up the steep hill and it eventually chased us back to focusing on our true goal for the day.

We moved easily over the steep terrain but our pace was slow and steady.  The frozen ground sometimes made the hiking difficult as you had to be sure of your footing.  Suddenly there was a change to the terrain as a small ravine opened up in front of us.  There was rock scree all around and I was certain we were close to the rock face.  We continued to move along the contour we had been following and then a small rock face appeared above us.  We climbed it and then more rock appeared further up again.  The sun shone brightly and we could feel its warmth as we worked our way up towards the top of the steep escarpment.

On the way up we stopped many times to appreciate the view but as we finally made the top of the face I felt a strong sense of accomplishment.  I had a broad smile and felt a bit giddy.  It wasn't a hard hike but it was such a great day and to be there with my Dad just felt incredible.

We made our way down through a steep ravine on the south east side of the escarpment.  Because of the steep grade we covered ground quickly and before I knew it we were walking along Trout Creek again.  There was some cool topography that puzzled us and again we marveled at God's creation.  The hike ended much too quickly and we'll both keep this one close for a long time.  Here is a quick movie on the day.

Posted by Wandering Whalen at 10:08 PM