The Changing of the Torch

I grew up being an athlete. I dreamt of winning the Stanley Cup, of competing for Olympic Gold. It was a great dream to have as it kept me motivated. For a goal oriented kid who struggled to keep his attention on anything for more than 3 months that was important.

In 1988, when the Winter Olympics were hosted by Calgary, I was a young teenager. I can vaguely remember the torch relay coming through my hometown. It is a blur. We were ushered out of our classroom, which was cool, and lined up along Main Street with the rest of the school. Kids were screaming over nothing as far as I could see. I thought they were simply just happy to be out of school. Then a person in a red outfit ran by carrying a torch and that was it. It was low key, there were no flags handed out, no big trucks or RVs leading the way. There was a police escort but that is the only vehicle I can remember. I’m not saying that is all that was there, but simply all I can remember. 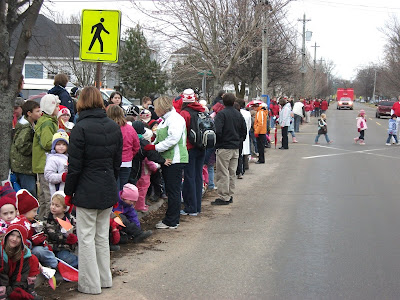 Fast forward to November 24th, 2009 and the torch once again is making its way through my home town. There was a lots of color, lots of escort vehicles, plenty to cheer about, and a small community party, complete with a stage and music. We know how to celebrate in the Maritimes.

What a difference twenty two years make. Not just in the manner in which the torch was brought through Town but also on the impact it had on me personally. My childhood dreams have now been realized…well some of them have been anyway. You might say I even have focus now, at least enough to write a blog every once in awhile. But I’m getting off topic. 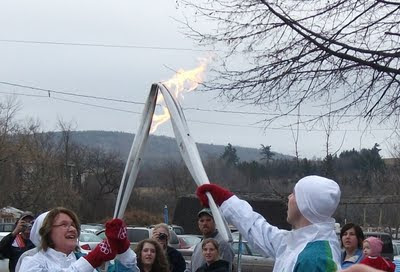 The Olympic Torch is a piece of history, a very old piece of history. Sure the torch being used this year isn’t the same one that was used at the first Olympic Games in Greece, but it carries the same spirit, the same meaning. As a kid I couldn’t understand this nor feel it but now as an adult it was a moment in time. The torch bearer seemed to run in slow motion as I watched and I could feel myself trying to etch this memory in stone. I managed to take a couple of pictures, and I will post a couple, but they will not do justice to what I hope to file in my memory bank.

Now the world waits for the Olympics to begin. Some communities still wait for the torch to reach them. If you happen to be in one of these communities I encourage you to get out there and even run along beside the route for a bit. I hope my son enjoyed riding on my shoulders and his memory was moving in slow motion and taking it all in. I know that once the Games begin, he and I will be spending sometime in front of the television watching TSN and CBC coverage of the hockey, bobsled, skiing, aerials and what ever else takes his interest. 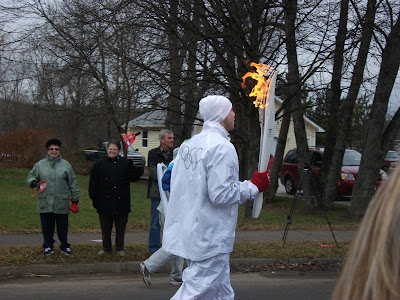