I had the opportunity to drive up the northwest coast of Nova Scotia today. It was a sunny day and I was ahead of schedule so I was able to take some time and appreciate what God and man had laid before me. The first place I noticed was Amherst. This place blew me away. I have been there before to play hockey or travelling through for work but had never noticed the number of stunning homes and buildings in this community. The masonry

and rock work of the old commercial buildings was astounding and provided a crowded but very comforting look to the main streets. If not for the cars I would have felt like I stepped back in time. Almost every home seemed like it had a turret on one corner or another adding to the time warn feel of the downtown core. I really wanted to take more time but I did have a schedule I had to keep and I felt there was still more yet to come. The picture of the Tantramar Theater comes from the Town's website and is only a small example of what is there to see. 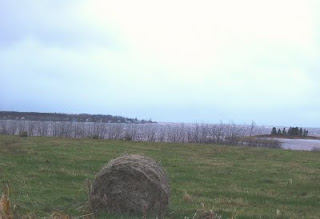 As I drove east through Amherst the landscape filled with slightly undulating pastures filled with various types of livestock. I was surprised, given the price of beef right now, to see how many beef cattle there were. The marshes and wetlands provided an unfamiliar characteristic to the farm land not seen in my part of NB. This was made even more bizarre by the number of seagulls and cormorants in the fields as well. The land looked well managed but worn and the livestock added a life quality that was greatly needed.

The direction of Highway 6 turned seaward again and I passed through Port Philip before entering Pugwash. This small seaside community was home to the famous Seagul Pewter and has a large Windsor salt facility. Despite these industries and a well protected harbor it is still a small town. It prompts me to think about how some areas boomed while others struggled to simply exist. Pugwash has beautiful scenery, seaside charm, economic resources which have all likely been preserved because it has been able to remain a small community.

I continued on along highway 6 and passed through Wallace and again enjoyed the small seaside charm of Nova Scotia’s west coast. I continued on to my destination at Tatamagouche where once again my preference for small town charms was tickled by this throw back in time community.

I spent a couple of days in Tatamagouche for a workshop. We stayed at the Tatamagouche Center and I was really impressed with this conference and retreat facility. The home cooking, the comfortable rooms, and relaxed atmosphere was a great spot to bring two sides of a working relationship together to improve future communication links. 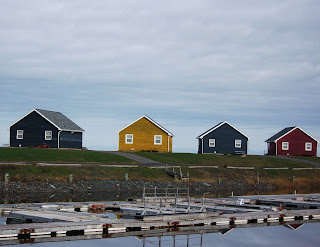 My drive home after day two days of workshops was not as enjoyable. The weather had turned poor and I had to focus more on my driving. The seas were a roiled brown mocha topped with a frothy white cap. Despite the snowy weather and my white knuckle grip on the steering wheel I made the best of the drive but was happy when I pulled into my own driveway.
Posted by Wandering Whalen at 2:04 PM