Great Way to Spend an Afternoon In Saint John

This is my column that appeared in the August 17, 2010 edition of the Kings County Record.  It was a great way to spend a day in Saint John, NB.  I've added a map to help you get there. 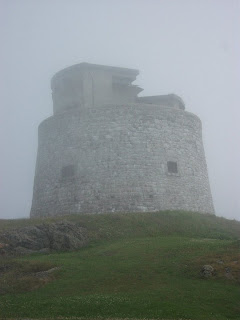 A few weeks ago I was planning on writing a column on how I spent my 's Parks Day, but other things became more of a priority for me.  I feel that it was a great day spent with family and we visited a park many of you have likely heard of but never taken the time to see.  The best thing about 's Parks Day is that there is free admission to all of the National Parks so if finances were keeping you from visiting a park, on that day you could move it up on your list of priorities.
My family had to go to on July 17th, which was Parks Day, and we were looking for a way to spend the afternoon.  We were seeking out something entertaining, economical, and family friendly as we had our kids and my Mother-in-law.  We decided to go to Carleton Martello National Historic Site, and was I ever surprised by what this small, but significant site had to offer.  I had driven by this Historic Site a number of times, in fact I lived in that part of for over a year, but never had I stopped to take it in before.
From the moment we stepped out of the car I could tell there was something special about the place.  You could smell the salt air mixed with wood smoke from a smoldering camp fire that was being tended by Site staff.  The weather was overcast and gave the site a more time appropriate feel.  We made the "mandatory" stop at the information desk and washrooms before making the climb up the short but steep hill to the Tower.  My son was anxious and it made it hard to enjoy the entire surroundings but his youthful excitement and continual exclamations "Mom, Dad, Nanny, come see this!" always peeked my interest and so I would move on.
Inside the Tower it was laid out with the time specific attire from cookware, army uniforms, cots, rifles, and model canons.  The cramped, but well organized quarters, likely provided a very respectable representation of what the Tower was like during war times.  The Tower is also well situated, at least I think it is, the fog never lifted the entire time we were there so we couldn't see the rest of the City of from the top.  Despite that we spent time talking to the informative interpreters and reading the educational sign panels.  It was a great way to expose our son to history and maybe peak his interest in learning history.
After leaving the Tower we spent some time exploring the rock outcrops and the rest of the site.  The topography lent itself to its assigned purpose as it was a steep rock outcrop but it also made for a modest playground for young and old alike.  If you have never visited I recommend you check it out.  Write it on your calendar for the next 's Parks Day, which has been held every year since 1990 on the 3rd Saturday of July, so in 2011 it will be July 16th.