Awhile ago I had read about an event that I thought my son would really appreciate.  It isn't something that I would have likely enjoyed as a kid but he is slightly different than I was.  I truly love him for this difference and when I see that side of him show, I respect him for how comfortable he seems to be with it.  I always had that side but was never comfortable as a youth expressing it and it makes me proud that he can so readily embrace his intellectual and artistic side more readily than I ever could as a kid or even young adult.
Where was I?  Oh yeah, the event I read about.  My son's five year old intellectual side loves dinosaurs.  So when I found out that a tyrannosaurus rex display was going to be at the Nova Scotia Museum of Natural History I immediately started planning a trip to see it.  It was a family weekend getaway.  I have to state that I was impressed with the organization of the Nova Scotia tourism websites as I surfed for information to plan the weekend.
Two weekends ago we made the drive to Halifax with anticipation and a sense of adventure.  It was likely the longest drive either of our kids had been on and luckily for me and my wife they travel really well.  We only stopped twice for pee breaks and only heard "Are we there yet?" twenty times or so.  Due to some car trouble we were late getting on our way on the overcast Saturday morning but we made Halifax and after some misguided site seeing of the city we found the museum.
It took no time for Seth to get out of his booster seat; in fact he ended up being lectured on waiting until the car stopped before unbuckling.  We made our way to the entrance where the walkway was lined with whale bones and already he was having fun.  We stepped in side the museum and I was immediately impressed with how many people were there.  I never would have expected to see people lined up to get in on what turned out to be a sunny Saturday afternoon. 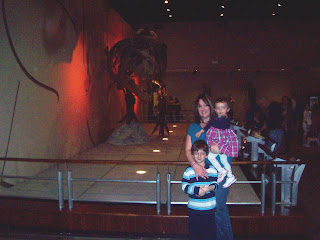 I started to feel like a kid myself as we stepped into the t-rex display.  Seth ran up the ramp and stood there wide eyed and mouth open in awe.  I'm sure my eyes were wide too as I was impressed with the size of the ancient reptile.  It was all we could do to keep up with Seth as he dashed from interactive display to display.  It took no time for him to see all there was to see and we were worried we wouldn't have time to see it all.  From the t-rex display we took in the other displays, including the bird display, the wildlife, and marine displays. 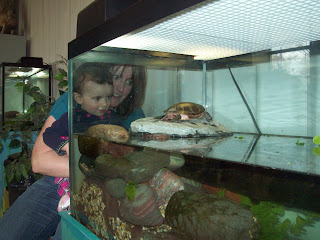 After we left the museum we took some time to walk through the Halifax public Garden and we were fortunate enough to take in some more great wildlife.  Geese, swans, ducks, birds, turtles, and some other questionable characters were all observed by the kids as we wandered around the wonderful green space.  The history of the trees and the obvious, painstaking, effort put forth to plan and maintain the space was as impressive as the size of some of the trees.
As we left the city, in which I spent two years living in sometime ago, I got a bit lost trying to find Lawrencetown and I ended up taking the long way along the shore.  This irritated the kids a bit but I resolved to enjoy it a little.  We were going to stay with my Aunt Pat and Uncle John and I made us a bit late for supper.  Sorry Pat and John.  We enjoyed their hospitality through supper before heading to the beach to watch the sunset.  This shoreline on the east coast often gets hammered by some of the biggest waves along the eastern Canadian seashore.  It makes for a great spectacle and I was hoping to share this with my family.  We were lucky to witness some surfers cashing in on some good size waves and Seth and Michelle were quite impressed, in fact for Michelle it might have been the best part of the trip.  It was windy and really cold though so we decided to leave before the sunset.
We returned back to my Aunt and Uncle's and spent a quiet night with them.  It was rewarding to watch as our kids, who seldom see this part of our family, interact so easily with them.  That is one of the best things about family I guess, they are always there.
The next day we made the long drive home and were tuckered out when we finally pulled back into the driveway.  Surprisingly we had other family obligations to attend and made them with little trouble but when night time came that evening, none of us had trouble falling asleep.
This video is a bit dark but I couldn't help but post it.  My daughter quickly  adjusted to being at my aunt and uncle's.

Posted by Wandering Whalen at 9:29 PM