So it is, unfortunately, over for another year.  The Sussex Corner Winter Carnival wrapped up yesterday with a great fireworks finale. 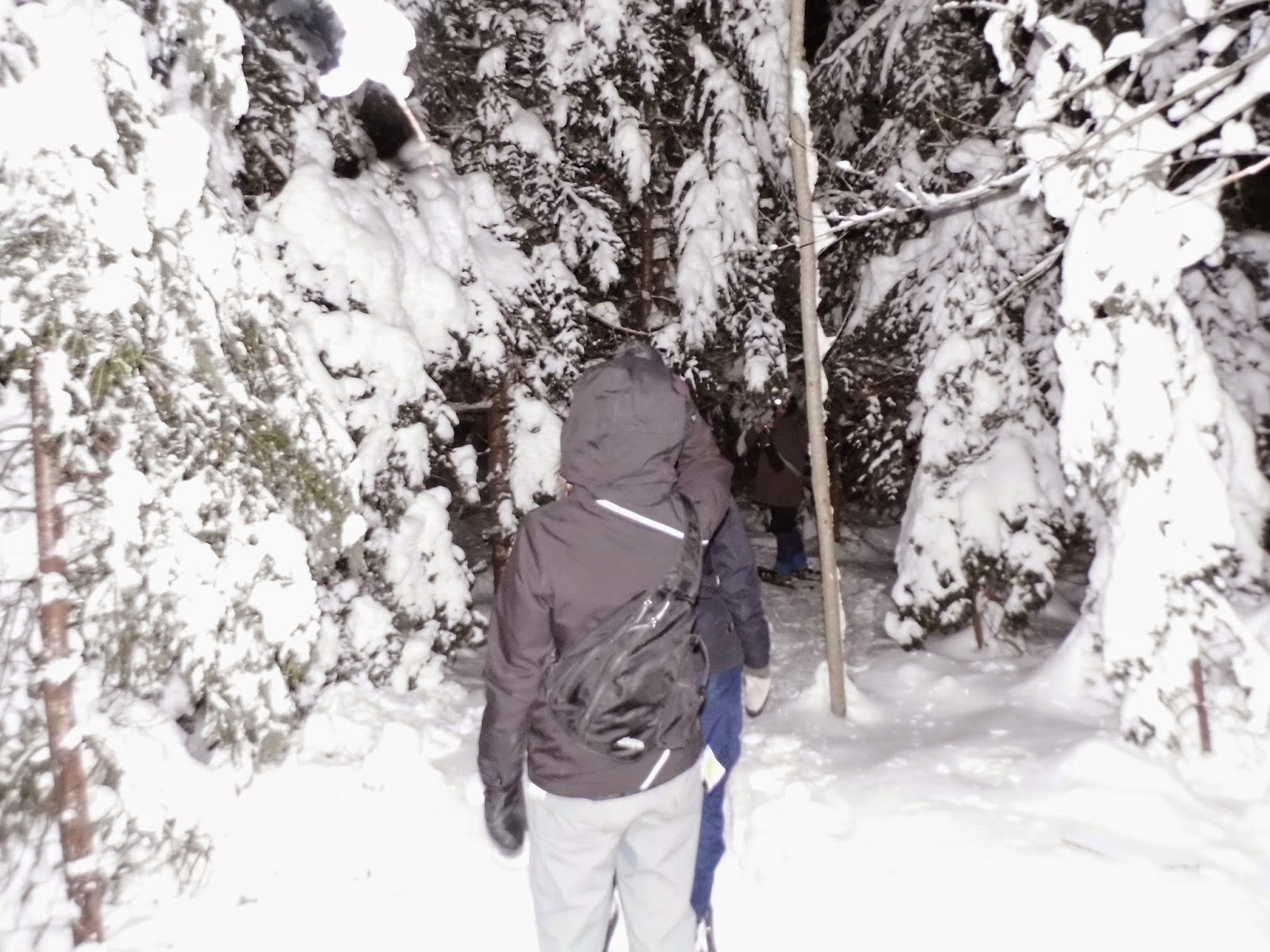 The winter celebration kicked off on Friday evening with a snow shoe trek to the Bluff escarpment.  With a clear evening the weather was cold but more than bearable and I wasn't the only one who thought so.  About 40 people accepted the challenge from Outdoor Elements to make the stomp up the Bluff and they all came with smiles ready to go.

The trek along the well beaten trail was peaceful, even with 40 people.  The snow was hanging thick off the fir, spruce, and hemlock and it muffled any sounds and gave the landscape a feeling of reverence.  As we walked up the trail, the tall white spires made it feel like we were walking up the aisle of a well decorated cathedral.  When we made the face of the Bluff, the lights of Poley were shining bright as were the lights of Sussex Corner and Sussex beyond.  The stars above were bright and you couldn't help but look up towards them.  It was a great evening and when it ended I was excited for the next day.

The next morning started off early for me as I volunteered for the Corner Cup Pond Hockey tournament.  We had 6 teams registered to vie for the Cup and they were going to earn it.  The temperature was a chilly -24C when a team from Home Hardware and one from the PotashCorp Civic Centre took to the ice for the first game.  When the tournament ended it was "The Boys" from Moncton who get to place their names on the Cup.  The action was fast paced despite the very hard and choppy ice.  By the end of the day the puck was bouncing a lot but the players all played on the same ice and the talent raised to the top.  Congrats to "The Boys" 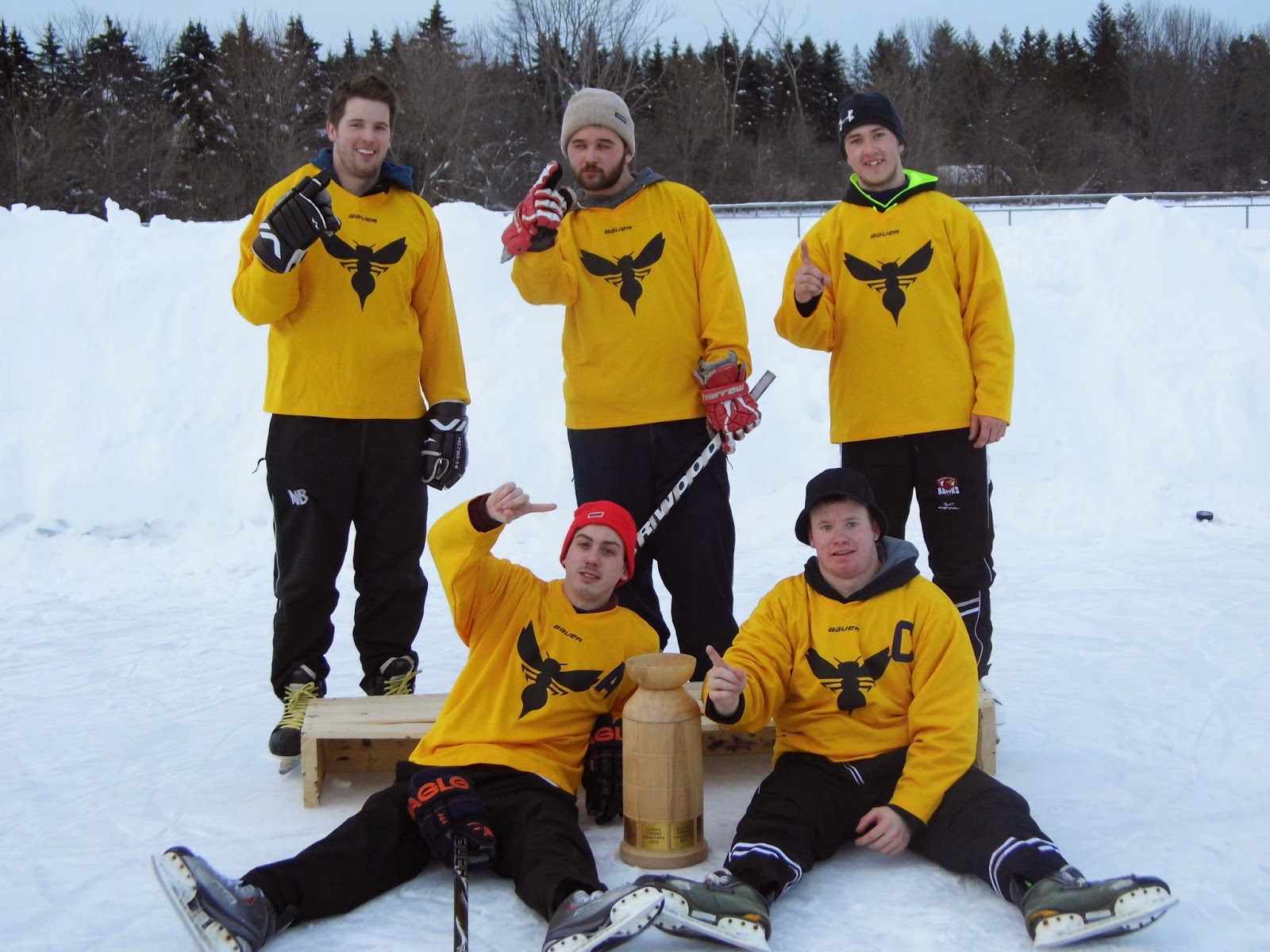 By mid noon the hockey players needed a break so we turned the ice over to the kids and families.  The broad smiles hidden under large toques and hoods couldn't be hidden.  As I had a chance to take in more than the hockey game, I was surprised to see how many people had come to the carnival site.  There were kids clambering up and sliding down the large snow hills we had formed, Sussex Minor Ball had their barbeque cookin', the sleigh rides were gently sliding along, kids faces were glittering with paint, snowmen were popping up all over and hot chocolate was flowing. 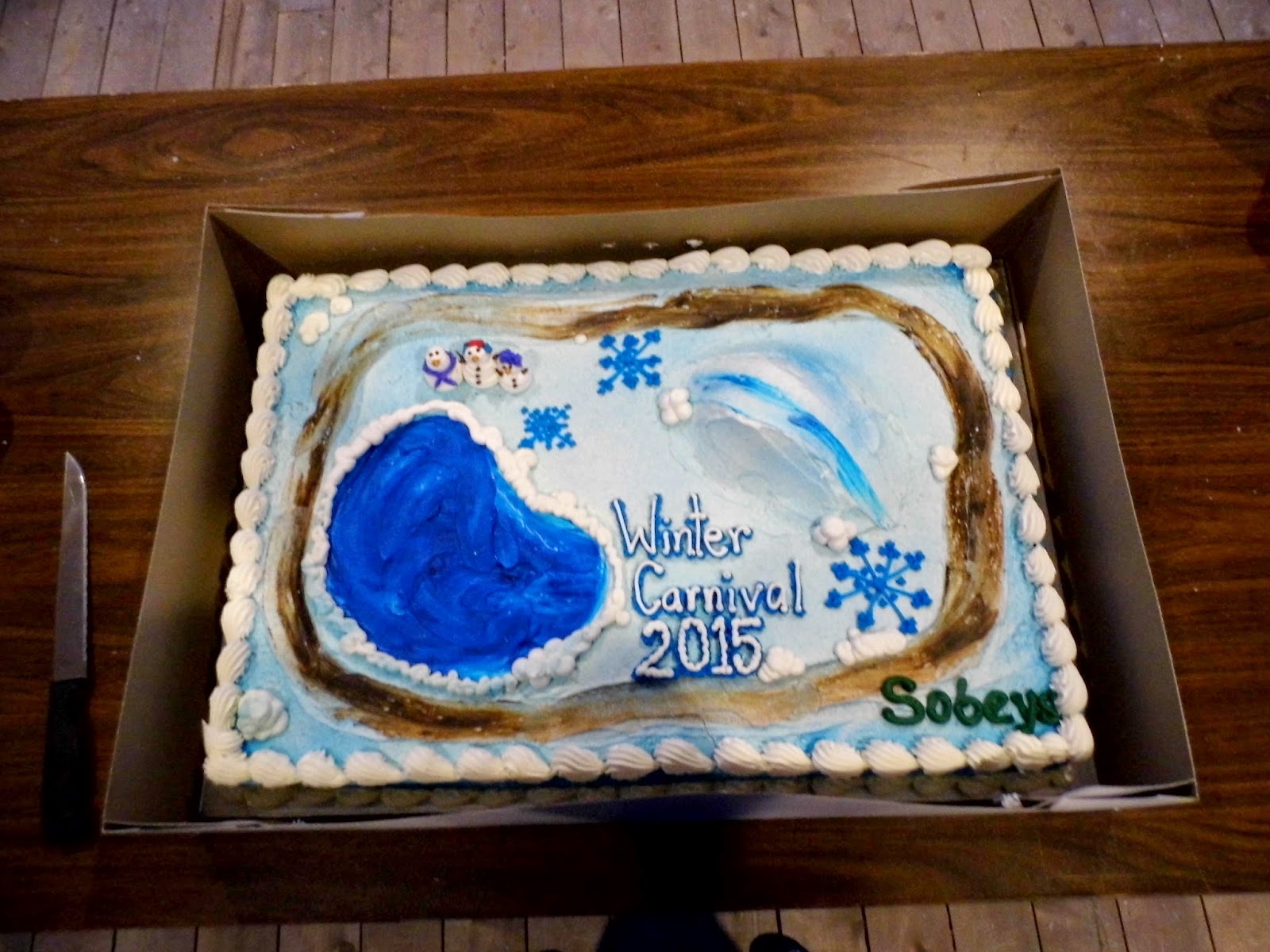 The excitement around the site was contagious.  Kids were laughing and parents were chatting amongst themselves and the sun was shining.  Maybe the magician spread some magic over the grounds, I don't really know, but like in past years, the atmosphere was electric.  As the championship game of the Corner Cup finished, night started to fall but the cake was keeping spirits high.  People were anticipating the fireworks and they would not be disappointed.  With the new amphitheater acting as the back drop for the carnival people milled around the cozy environs or waited in their cars babying their hot chocolate and cake. 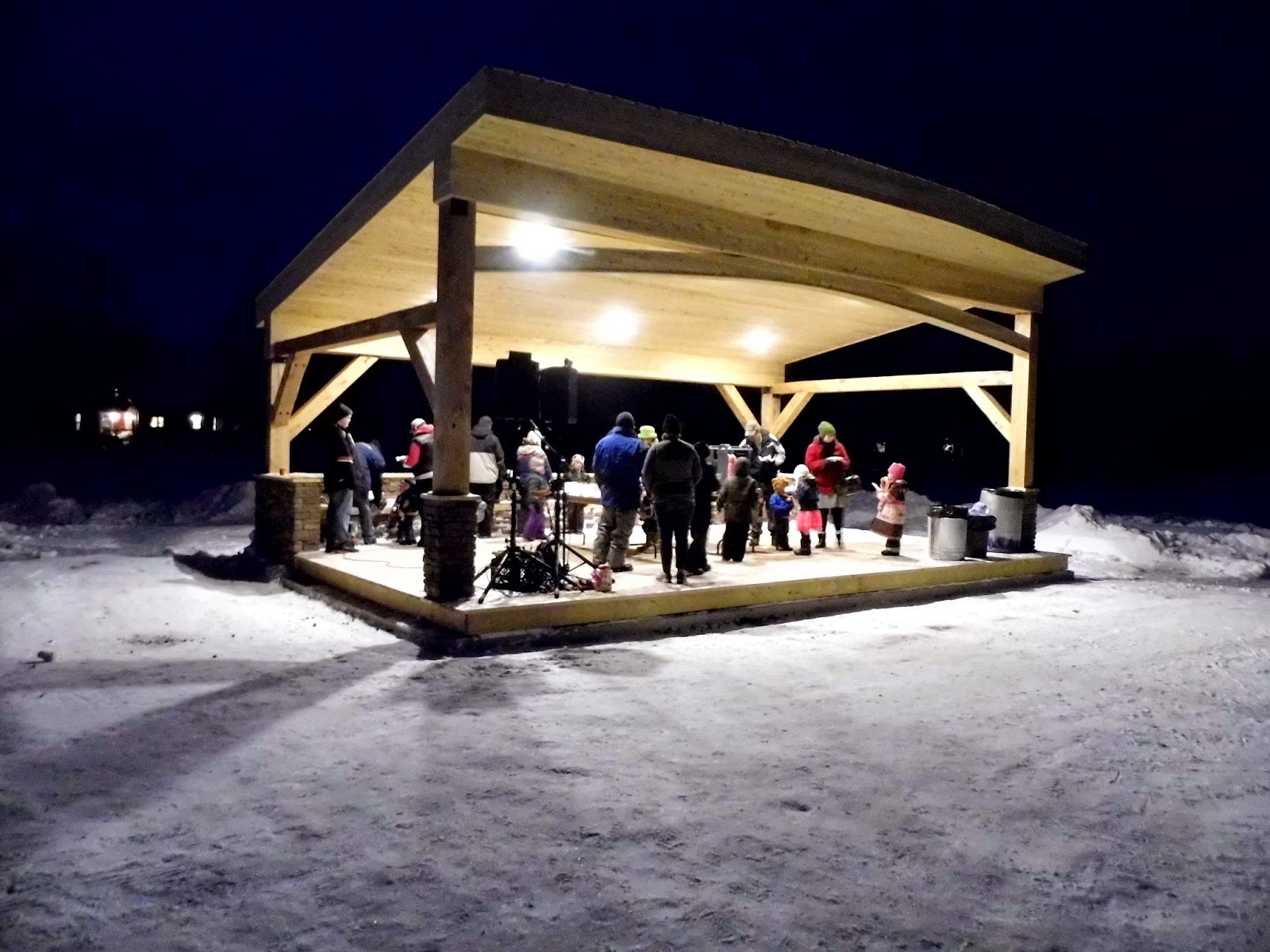 As I wound down my day with my family, I admired the reddened cheeks and thought how blessed we were to be able to spend such a day.  Winter should be celebrated and in Sussex Corner they celebrate it in style. 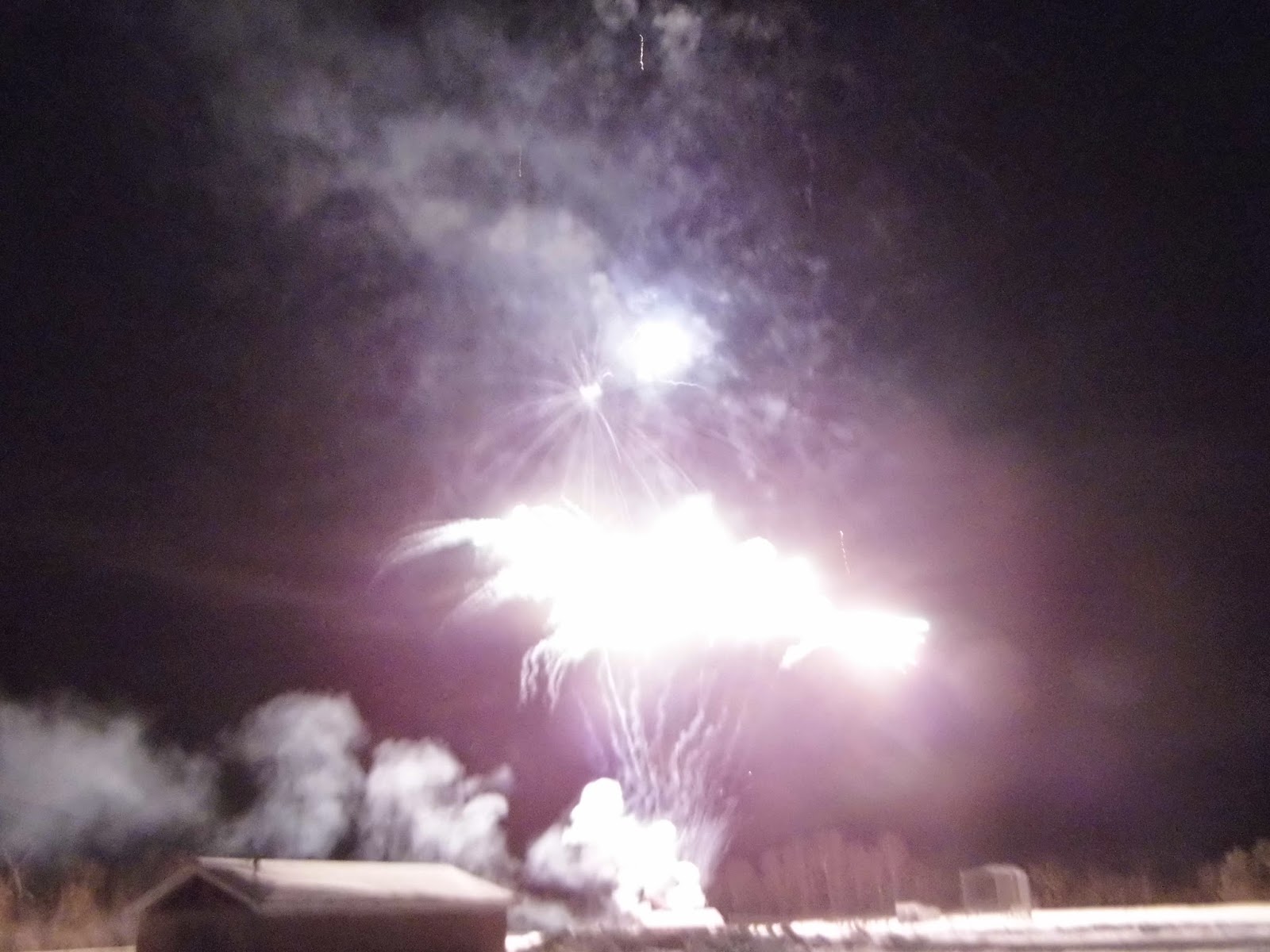 Posted by Wandering Whalen at 11:52 PM