So this has been awhile coming. but here it is.  The best thing is, there is still lots of time to get out on the links and shoot a round.  I know that my son is itching to get out again and I hope we can scratch that itch.

Sunshine has been a big part of August and so far September and this past weekend I spent a hot day on a golf course bonding with my son.  In his words "I see golf clubs in my future Dad."  The day proved to be a great success.  As a kid slightly older than he is now, I spent a lot of time at the Sussex Golf and Curling Club but over the past couple of years I have been searching for that sport where we could connect.  I think I found it.

Six people teed off the first hole at Midland Meadows Golf Club, well four of us took our first shot while the two youngest simply enjoyed the walk around the course.  Midland is a great place for beginners to take their first hacks at their golf ball of choice.  It is a short course with relaxed rules and luckily for us the other golfers had lots of patience.  While I may have spent lots of time on the golf course in earlier years, the other three golfers that day were all first timers.

My son, a left handed golfer, struggled while using a senior set of clubs.  My nephew, a right handed golfer, was more comfortable using a junior set of clubs.  The boys got lots of practice, and even the two younger kids took some swings from time to time.  It is always amazing to me how quickly kids pick up new sports.  I know the kids were impressive with how they adapted to the new sport and surroundings but the most impressive golfer that day was my sister.

Natural athleticism is a gift and my sister has that gift.  She had swung golf clubs in the past but her time on a golf course was limited, due to the amount of time she spent on a soccer pitch as a kid.  Her drive off the first tee was not entirely impressive but it was in the fairway.  Her second shot was another dribbler down the right side.  Her third shot however was ideal and she landed it just off the small green.  As we approached the sixth hole she was starting to gain confidence and with it consistency.  She stepped up to the par three hole and drove her tee shot straight and true, landing it on the green. 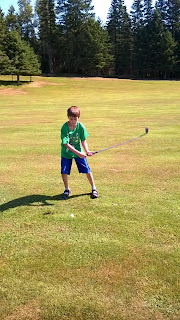 Anyone who plays golf knows that being able to putt for birdie is not easily attained but here my sister was on her first round of golf making a birdie putt.  She left the putt short but managed to sink her parr putt while I stood highly impressed and very proud.  Now anyone who knows my sister and I will realize that is a big statement for me to make.

Before the round started I gave the boys a pep talk about how golf can be a frustrating game but all it takes in one good shot to make you feel good about yourself.  At the end of the round I asked the rest of the foursome "What was your best shot of the day?"  Each of them had an answer.  My son had a chip shot on the eight that he landed within a foot of the hole.  My nephew had a great drive on the ninth and out drove his Mom, while his Mom had the tee shot on the sixth.  My best shot was my tee shot on the seventh hole where I played my slice perfectly around the dogleg.

The one shot each golfer remembered was enough to have each of them wanting to get out again.  I can't wait to see how many shots they remember the next round.
Posted by Wandering Whalen at 8:51 PM