It was one of those evenings when everything just seemed to be going right. The calendar on my GPS (https://buy.garmin.com/shop/shop.do?cID=145&pID=8701) showed that the fishing was going to be excellent and boy was it right. I had spent the day with family and was unable to go fishing until close to 8:00pm but I had the urge and so away I went. From the first cast it was nothing but action packed. I was fishing a stretch of brook that I had fished many times before but this spring everything seemed different. Almost a decade ago the Kennebecasis Watershed Restoration Committee (http://www.kennebecasisriver.ca/) had completed a riparian zone restoration project along this system and it was starting to really have a positive impact. Where once there was little in the way of shoreline trees there are now 25foot willows, maturing maple, and 10foot spruce. The water now runs deeper and the deep pools are full of fish.

Every cast was promising and the small 3rd order stream was producing some of the best fish I had seen from it in years. The majority of the trout were 8-9”, but I am sure I missed at least 2 trout that were well above 12”. Laugh if you want or say it is a “fish story” but I believe it is true. It was a wonderful experience to fish a system that has turned around, and the KWRC is to be commended on their efforts to restore the wonderful Kennebecasis watershed.

As I reached the main stem of the Trout Creek my expectations were low as I had little success on this same river the night before. As I reached the confluence though a large, deep, pool greeted me. I gently let out a cast slightly upstream from where the two systems met and before I could lock the reel I had a large bite. Wow! The Trout Creek too was full of fish. What a night. As I release the fish back into the Creek some geese flew overhead and I had that “Made for TV” feeling. I got giddy with awe and appreciation of where I was at that moment.

I didn’t want to leave the water that evening. As I fished three more deep holes with success the sun had started to set and dark was falling so I had no choice but to return to my car. I tagged the spot where I ended my evening on my GPS and made some notes so that I could return and fish further down. It was a wonderful evening and I made plans to return to the Trout Creek again soon. I walked out with a smile and watched as more geese and a couple of ducks flew overhead. What an evening, it was well worth the effort to get out. Well worth the effort.

Sorry I have no pics but come on...I was just to busy fishing :)

The weekend before this my Dad and I went out for a fish and drive. We wanted to explore some brooks that we hadn't fished before. We tend to do this often. We drove around the dirt roads and stopped at any crossing and for the first while had very little luch finding a modest stream. We usually fish a few holes in each and if the fishing is good we carry on. We fished two streams with no luck this day. Our third brook looked promising as it ran narrow and deep. Before long we were catching brookies but they were mainly on the small side. We kept at it though and as we fished downstream the fish seemed to be getting bigger.

Dad was on one side of the brook and I was on the other. As I made my way downstream in hipwaders the bank was getting very swampy and braided. It was becoming harder for me to cross each braid as they were getting deeper. It came to a place where I had no choice but to cross the brook and join Dad, especially if I wanted to fish the deadwater we could now see ahead of us. Dad thought he could make me a bridge out of alders but I wasn't so sure I wanted to risk that. Dad insisted and bounced up and down on the alders he had forced down from his side of the stream. You know what happened next. One snapped and Dad went for a cold swim. We both laughed our asses off as he climbed safely out of the brook. He was cold and wet and a bit emabarrassed I think.

I went back upstream and found a place to cross that just about topped my waders. By the time I reached Dad again he was finished emptying the water out of his boots and ringing out his coat and shirt. We decided that we would try a couple of casts into the deadwater and then head for home. It was a cold day, and Dad didn't need to catch a cold. My first cast into the deadwater came out empty as did Dad's. On my second I missed a fish but my third brought in an 11" brookie and as I tended to that fish Dad brought in another big fish. We worked the deadwater a bit more and I decided I would mark the spot using my GPS. As I finished the task of marking our location Dad let out an excited laugh from just upstream. I turned to see his pole bent heavily and a large shadow moving towards the alder clump just above him. It was a huge brookie and I let out a yell to him. He worked the fish like a pro (which neither of us are) even as it tried to tangle itself in the alders Dad patiently worked the line around to the backside and then manipulated the fish back out into open water. The steep banks meant we were going to have to pull the fish out into open air so Dad wanted him tired before attempting that or he would surely lose him. With lots of excitement from me, Dad maintained his patients and lifted the tired fish out of the water and secured it next to his body. 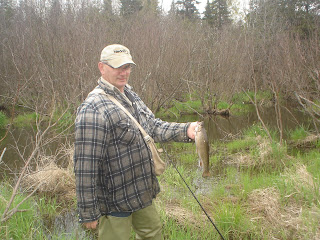 The trout Dad caught was only 13" but it had a height from adipose fin to pectoral fin of 3". For those waters it was a big fish and it ended a great day for us. We each kept some trout to eat but the cold day had a sweet taste to it no matter if we had kept fish or not.

See you on the water.
Posted by Wandering Whalen at 11:40 AM