None of us really knows what lay ahead of us. We hope Mother Nature looks kindly on us and provides us with ample sunshine. We hope the tides (http://www.bayoffundytourism.com/tides/times/) roll gently and that we can time our trip efficiently around them. Hopefully, with fingers crossed, no one stumbles or falls and injures themselves. 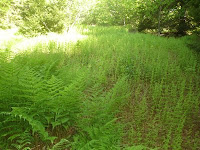 A backpacking trip across the Fundy Footpath is not to be taken lightly and we are all well aware of that fact. None of us are adventure racers and we are planning on taking our time to hike across this rugged, carved, forested, coastal, trail. It will take us four days to hike the 50km linear trail that runs from Big Salmon River through to Point Wolfe, approximately 7.5km inside the Fundy National Park boundary. We plan on doing some extra exploring up some of the dozen or so river valleys when tide, time, and our bodies permit.

Our first night destination is Seeley Beach and the anticipation of getting there and the excitement of just getting out on the trail had us all hiking a modestly brisk pace at first. Shortly, we were stopping to shed a layer of clothing and to take in the scenery. Many times the Bay of Fundy appeared before us as the trees gave way to sheer cliffs. Every time the scene was inspiring, mind clearing, and entirely rewarding. Whether we were standing on the edge of the rock outcrop looking towards Quaco Lighthouse, or we stood at Tuft’s Point looking over Long Beach. We stood silently every time until we took it all in. Then we would stumble over words trying to describe the scene and our feelings to each other. Eventually we would result to corny humor and simply let the scene speak for itself. 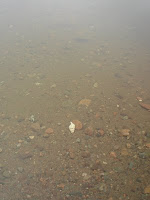 The morning moves on rather quickly and as we move along the coast we hear the roar of an excavator on the top of the ridge. While the sound was disturbing the sight of a large cut line that paralleled the trail for quite some distance was downright frustrating. We all made a pact to not let it ruin our weekend though. I think this was much harder for me however than the others.

We reached Long Beach before noon and settled on the beach for a relaxing break. The sun was starting to break through the fog and we enjoyed a good lunch. The tide was almost at high tide and this is a great area to simply sit and watch the waves. The different layers of sand and gravel create wild, unpredictable, 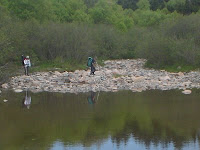 wave lines that are hard to predict but it is fun trying. It is hard to simply pick up and leave the beach because it is so serene, so surreal. I have yet to camp at this beach and someday soon I hope to. As we start the hike out of Long Beach we again are disappointed to see a cut line for what we assume will be a look out for the Fundy Trail Parkway. If I want to tent here I will likely have to compete with day users and car campers, despite this, I think it would still be a great spot to spend an evening watching the waves from my tent door. 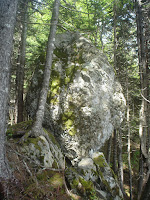 Footpath. From Long Beach to Seeley Beach is a walk through rock outcrops and interesting geology, including a place I call “Football Rock” as the large, somewhat oval shaped rock seems to be teed up for a kick off. I always use this rock as the homestretch indicator for the hike into Seeley Beach and before I know it I am descending onto the expansive boulder and cobblestone beach.

I truly love this place and if I had to make a life from the wilderness this is where I would choose to do so. With the Bay of Fundy at my door and rugged wilderness as my backdrop, how could I ask for more? Well, I suppose I could ask the good Lord to restore the fish populations but that would just be greedy.

Since it is still early in the afternoon I leave the group at Seeley Beach and explore Seeley Brook. I rock hop close to 2km up the small stream as the sun beats down and glistens off the water. The large boulders seem like numerous empty chairs in a theater and I decide to sit and watch for awhile as small trout scurry up the clear stream. The warmth on the rock is soothing to my tired muscles and I find it hard to believe that such a hard surface can feel so good. 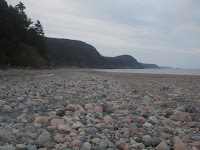 It is closing on supper time and since I am cooking I have to head back to camp. When I get there 2 of my 3 hiking buddies are sleeping on the beach. They look like they had hardly moved from when I left them. We all decide to move up to the northern end of the beach to camp for the night. The tenting is better there, but you have to go further for water. I have brought frozen trout, which my father and I had caught a week or so earlier, for supper. I fry these over an open flame and compliment them with instant potatoes and some vegetables. It was a feast fit for a king and we all sat around the fire content and happy that night. The conversation was relaxed as the fire crackled and the waves crashed less than 20m away. We discussed future trips and the future of the Fundy Footpath. We talked about family and friendship. We bonded. 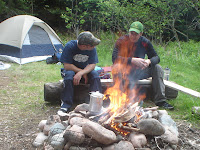 Posted by Wandering Whalen at 9:29 AM