This is the fourth in a series of blogs on my recent trip across the Fundy Footpath.  The first entry was about the hikers.  The second entry was about the Parks and I held back nothing on my dislike of the way the Fundy Trail Parkway is being developed.  The previous entry was about how much I enjoy the mud flats along this undervalued coastal trail.  I have been attempting to describe the iconic features of this jewel studded, 50km hike, and the next icon I want to showcase are the numerous waterfalls.  I am likely to leave a couple out but there are so many that I couldn't possibly include them all.  To be included here I evaluated on a personal level whether the waterfalls would be considered iconic or not by others.  Certain locations speak to people more than others so if I leave a waterfall out, I encourage you to still try to get out there and witness it and see what it has to say to you.

Our hike would take us east to west and the first waterfall we would encounter is found a bit off the beaten path inside Fundy National Park.  Since it is in the Park you need to tread lightly to get there.  To be honest the only reason I know it is there is because on a previous hike I needed to take a pee break and wandered into the woods below where people were filling water bottles.  On that previous hike, I didn't go down to the falls but I could hear them, and this time they were still beaconing me.  These falls likely vary in size depending on the amount of rain or snow melt that is feeding them.  On this hike they were a modest falls where the water had sculpted the dark conglomerate rock into two steps before scurrying off towards the Bay of Fundy through a steep, forested, gully, green with mosses and ferns.  What makes these falls iconic to me is the fact that very few people know they are there and they are unnamed (as far as I can tell.)  To me this makes them more valuable and thus iconic.

After leaving the park you cross a number of steep valleys and small ravines.  No doubt every one of them has a small waterfall or chute and I struggle not to clamber up each little water course in an effort to maintain the loose schedule that we have set.  Unfortunately, we all need to return to a hectic life based on needs and wants after the weekend.  The next set of falls though removes all thoughts of that life.  Tweedle Dee Tweedle Dum Falls is a large set of falls and can cause even the most negative among us to smile and raise his voice an octave higher as we share our thoughts on this great wilderness we are so privileged to take in and enjoy.  The modest pool at the bottom of these falls are irresistible and you have to wade in and have your picture taken.  Once done there your curiosity will compel you to climb to the top and explore further.

The next stop on the waterfall tour is slightly less voluminous but no less impressive.  Maybe what is so iconic about these falls is the fact that they sit right at the mouth of the brook.  It is imaginable that in recent geologic times that the falls used to fall directly into the Bay of Fundy.  Now the plunge pool is separated from the Bay by a boulder and cobble berm.  Telegraph Brook has a small campsite right next to the pool at the bottom of these falls and with a tent pitched there it is the iconic image of the Fundy Footpath.  The small Telegraph Brook contains a number of falls and chutes above this final falls but to explore this Brook is difficult as it is a very narrow and treachourous ravine.

For me one of the cool things about waterfalls is the fact that they may not always be flowing.  When you find these running it's like hitting the jackpot.  As we continued east on the FFP we were blessed to see water flowing over the high rock face that greeted us as we crossed Wolfe Brook.  On past hikes I have seen this fall completely dry while on others I have seen it with much more water.  Maybe the interesting aspect of this waterfall is as you continue the hike, you make a challenging climb to the top of the small unnamed stream that provides it with its fuel of force.  The green mosses, lichen, and ferns indicate the boggy area where a small spring bursts from the ground during wet times to feed the waterfall.

As icons go there are few along the Fundy Coast Wilderness area that compare to Walton Glen Canyon and the associated falls.  Although they are not on the FFP, they are worth taking the time to see.  Approximately a 2 hour hike from the Dustin Brook campsite these impressive falls are made all the more impressive because of the wilderness you need to traverse to get there.  The Eye of the Needle and Walton Glen Canyon are narrow slots with large rock faces all around.  A hiker spends more time looking up instead of down which in this location can be dangerous.

There are many more falls but these are some of the best.  Below are some pics of other falls along the hike.  Note the shadows on some of the photos and how they change the mood of each of the locations. 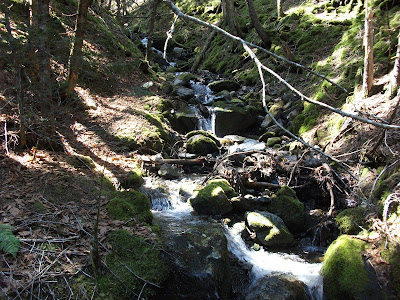 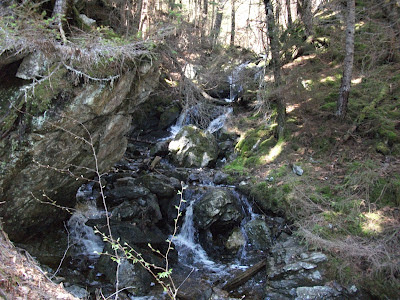 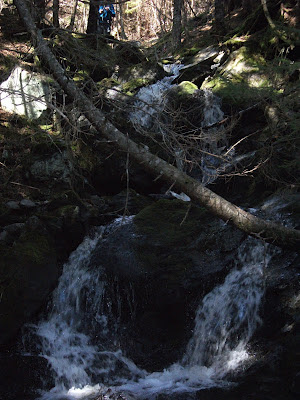 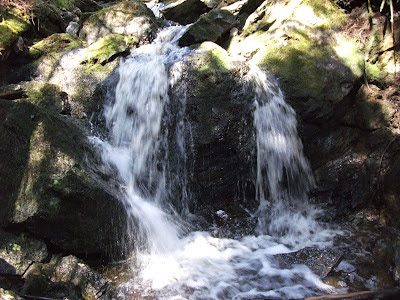 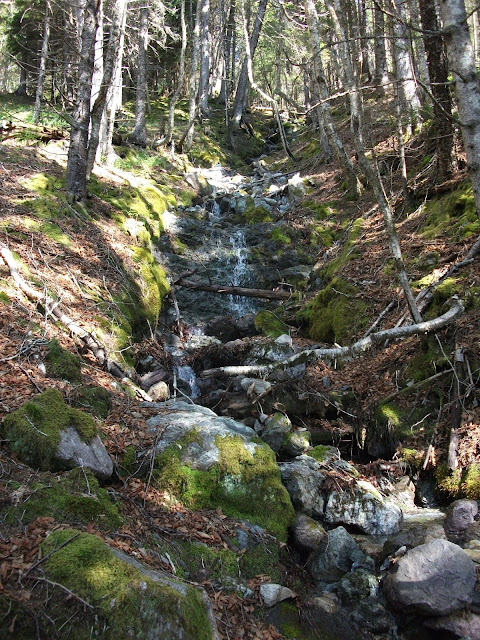 Posted by Wandering Whalen at 1:37 PM