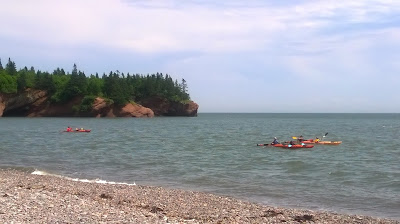 Everyone has that go to spot.  That place where you go when you need to get away from the hustle and bustle of the urban center.  For my family we like to go into St. Martin's, NB.  The quaint Village is becoming known as the jump off point for the Fundy Trail Parkway, but for me, it is more than that.  I have been enjoying the Village since well before the FTP was developed.  With small local shops, artisan galleries, fishing boats, and covered bridges, you can't beat it for appeal.  This entry, published in a recent Kings County Record, reveals how we recently spent a day there.

It is mid July and the mercury has finally pushed over 25°C.  You sweat by simply stepping out on your back deck so there is only one thing you can do.  You head to the beach.  Luckily in NB we are fortunate enough to have lots of beaches to enjoy.  We have water on three sides, the Bay of Fundy to the south, the Northumberland Strait to the east, and the Chaleur Bay to the north, , not to mention the Saint John River runs along a good portion of our western boundary and it also has many beaches.

From Sussex Corner, I recently drove the scenic Route 111 into St. Martins where my family and I spent the better part of a day simply lazing around on the long cobble beach near the caves.  It was amazing how well the whole day went.  It was high tide so we couldn't explore the caves so we had misplaced concerns about whether the kids would enjoy the day.  We had no need to worry as they easily entertained themselves with rocks, driftwood, and one another.

We lathered sun screen on the kids and set them free.  Instantly their imaginations took off and they were playing games in the waves and throwing stones at various targets.  It was inspiring to see the way they readily developed different little games.  It was like the sea breeze instantly prompted their previously dormant imaginations and sent them into overdrive.

We set up a picnic area complete with coolers, Coleman stove, and camping cutlery. When I stood back and looked at the scene, I felt like I was looking at a picture out of the 1960s.  I think the Coleman stove made the scene, along with the tin plates and cups painted red with white flecks.  St.Martins definitely added to the old time feel with its older homes and covered bridges. 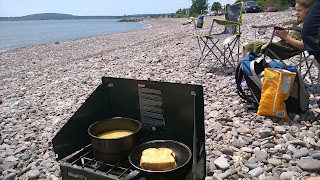 After some great grilled cheese sandwiches and soup, the kids were re-energized and went to work building their version of seawalls.  Their imaginations moving towards more industrious ventures as the tide shifted and started moving back out.  Their enthusiasm started to noticeably waver and the kids started drifting apart as they got tired.  I watched as each of my kids wandered away from the group a bit and each became reflective and I noticed a maturity in them that I hadn't noticed before.  I was oddly proud in the moment and committed each of them to memory. Okay so I took a digital photo so I'd remember it later. 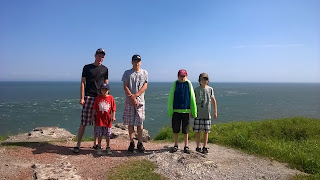 We decided that we should leave our mini-paradise on the beach and check out the Quaco Head Lighthouse.  The short drive makes the lighthouse a great change of scenery when in St. Martins and it too is a mini paradise.  The high rugged cliffs and rocky island outcrop just off shore leave no doubt of the need for the majestic lighthouse.  The old foundations and remnants of old fields hint at the location's history.  It would have been a great site to see when it was in its prime, but even now it is a scene that has that special feeling, a spiritual aura.  It was a windy afternoon at the lighthouse so we didn't stay long but the whole day will long stay in our memories.  If you get a chance you should take the trip to St. Martins and make some memories of your own. 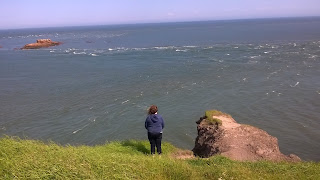 Posted by Wandering Whalen at 10:11 PM