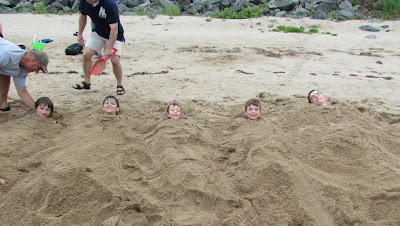 Earlier this summer the Whalen family all got together and took a family trip to the western shores of Nova Scotia.  We were fortunate enough to know some fine folks with a cabin along the Northumberland Strait just outside of Trenton.  When I say this was a family trip, I mean multiple generations of Whalens all heading to the same location; three generations to be exact.  Even though there would be a cottage, some of us would end up sleeping outside and likely be all the better off for it.

No vacation can start without first reaching your destination and the drive to Chance Harbor, our planned paradise, would take about 3.5hours.  Since the kids, the dog, and enough bedding, clothing, toys, and games for 5 days were all in the car with us, it was going to be a long drive, or at least I thought it would be.  We made stops in Salisbury, Sackville, and Tatamagouche but the time seemed to fly for us.  The kids were incredibly patient and even the dog traveled well.  We only got turned around on one occasion just before we arrived and only because I missed the private road sign to our cottage.

The cottage was a small two bedroom, one bath cottage nestled on a point overlooking Chance Harbor.  We didn't actually have a view of the harbor, but then again, it isn't really a harbor as it is a small river that is backed up behind a sandy isthmus.  In the end it wasn't going to matter as we'd spend most of the time at the mouth of "The Harbor." The weather was almost too hot but trust me we were not complaining.  We soaked up the sun, the sand, and the waves.

Our first night was spent exploring our new surroundings and getting comfortable in our home for the week.  For me that meant setting up a tent and spreading out sleeping bags for five.  My son and daughter, my two nephews, and my father would all be sleeping in the tent the first night.  We enjoyed a brief bonfire that first night but everyone was tired and bedrolls and bedrooms called. The dog would sleep with my wife in the cottage along with my sister and my mother.  It would later prove advantageous to be sleeping outside as the cottage was extremely warm through the night.  The dog added a further frustration to those in the cottage as she paced back and forth wanting to check on those outside.

The next morning we lazed around and knew we had no where to be and relished in that reality.  When I say we lazed, I mean we didn't eat breakfast until close to 10am, we walked a slow pace to the beach where we tanned and used as little effort as possible to entertain the kids.  Just a note, hermit crabs will entertain 7-16 year old boys for well over 2 hours.  The beach was expansive with the river coming in on our left and the beach head on the other side a large isthmus of sand.  We couldn't resist crossing the river and exploring the beach there.  The water on that beach was now the Northumberland Strait and we could wade out a long ways but had to be wary of the currents and under tow.  We kept a close eye on the kids here and after a short time and swim we moved back to the other side of the river again and started building sand castles and chasing crabs again.

That night we gathered around the camp and told stories and laughed.  We let the kids sit and listen in and I'm sure this will sit in their memory banks for a long time.  I still have memories of such times with my parents and they have had a large influence on how I've developed, whether positively or negatively.  Oddly this type of gathering, away from home, is rare for our family.  Moments like this are usually had at the Whalen homestead.  I'd like to have more of this type.

The room in the tent for night two was a little greater as Shaylee slept with her Mom.  This was quickly compensated for when it was decided the dog might sleep better outside.  The dog quickly found a spot next to Seth and was asleep in no time and stayed that way the whole night.  Before the rest of us were asleep my youngest nephew also decided to move inside to sleep closer to his mom.

Hot is the best word to describe the next day.  There was no way of sleeping in as the temperature in the tent was stifling and sticky.  It was only an indication of what was to come.  The temperature rose to over 30 degrees celsius and all we could do was sit in the shade of the maple tree next to the cottage.  It was too hot to do anything.  It was even too hot on the beach as the sand instantly burned the bottom of your feet, even with sandals on.

Weather was a key factor in the rest of the trip and I think the sweat in my eyes made it all a bit of a blur.  Washer toss, bonfires, smores, more beach time, and an enjoyable drive home.  It was a great way to spend a week and I felt truly blessed to have the chance to spend such quality time with my family.  I also felt very blessed in the way the kids all behaved throughout the week.  My own kids in particular bless me every day.  I love watching them grow and over this week I could witness that growth literally.

I want to thank everyone who made that trip so great.  You are all a blessing to me.  Thanks to Lindsay Thorne for the photos. 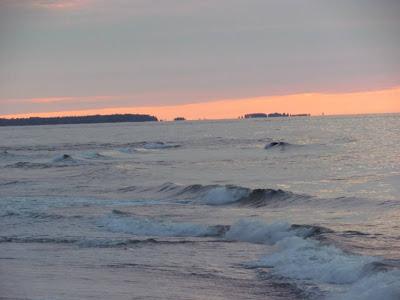 Posted by Wandering Whalen at 10:19 PM